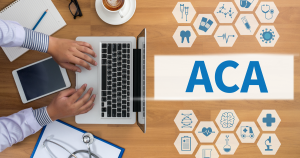 If your business has recently grown, you might find yourself preparing to meet ACA regulations and standards. Despite the efforts of current legislators the Affordable Care Act still stands intact. Since open enrollment ends on Friday, we wanted to take a look back at the brief history of ACA.

A Brief History of The Affordable Care Act

Inception of the ACA

The Affordable Care Act, or commonly referred to as ObamaCare, was first proposed by former President Barack Obama during the 2008 presidential campaign. While this was far from a new concept, the past Democratic administrations were unable to pass a mandated national insurance regulation.

The Patient Protection and Affordable Care Act was signed into law in March of 2010. Although the majority of provisions went into effect January 1st, 2014 many significant changes went into effect before this date.

Concept of the ACA

Most of the political action taken in 2009 was centered around the ACA. On July 14th the House Democrats first introduced a 1000-page plan for overhauling the past health care system. Many will remember the outrage and debates that insured as a result of this document.
In June of 2012, the last hurdle was cleared after the Supreme Court upheld the major of prisons set down by the health care law. This, however, leads to a suit filed by twenty-six state and the National Federation of Independent business who claimed disagreement with the mandate that individuals must carry insurance or pay penalties. The expansion of Medicaid was also among the list of reasons for the suit.

While the Supreme Court ruled in favor the most provisions of the ACA, they could not force cooperation with the Medicare expansion.

Execution of the ACA

Despite all debate, the United States House approved the ACA with a 220-215 vote on November 7th, 2009. The Senate later passed its version later that same year on December 24th with a 60-39 vote. The Senate bill was then amended and approved by the House in a 219-212 vote on March 21st, 2010. During this vote, all Republican representative voted against the law.

Then President Obama signed the bill into law in March with the core of the Affordable Care Act being “everybody should have some basic security when it comes to their health care.”